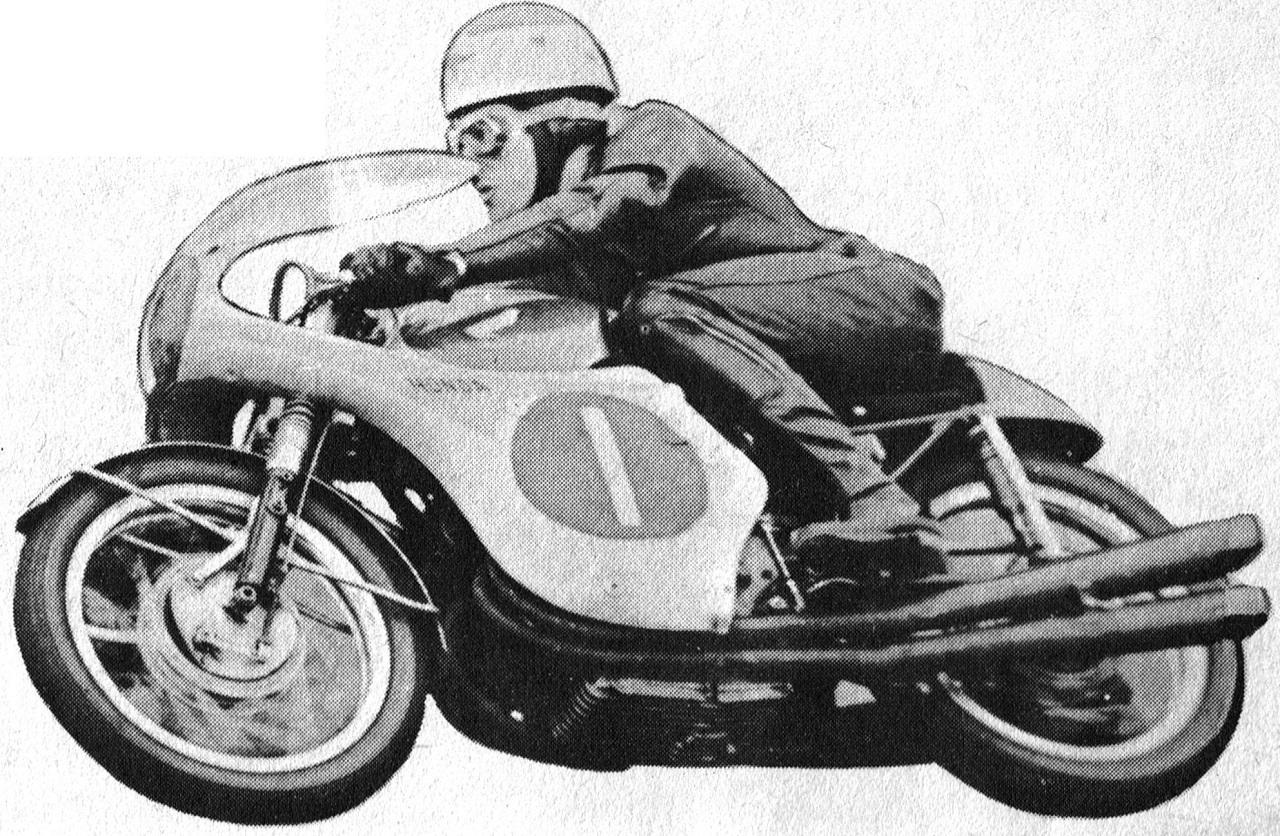 Lineage of the Honda Fours

When the Honda 750 Four was introduced in mid-1969, it created shock waves throughout the motorcycle world that continue to be felt today. Four cylinders, overhead camshaft, disc brake, electric starter—the 750 had everything. The machine had not been built that could match the sophistication and total mechanical integrity of the 750 Four. It stood—and still stands—apart from all others, the standard by which other motorcycles are judged. But such overwhelming excellence does not come easily. Motorcycles like this one are not created overnight.

Unlike Honda’s other road machines, which owe much of their development history to the evolution of earlier street bikes, the Fours are largely descended from the Honda Grand Prix roadracers. A decade before the introduction of the 750, the first Honda four was built. A double overhead cam 250, it was basically two of the earlier 125cc twins that had raced at the Isle of Man in 1959, connected side by side. With four valves per cylinder, it developed 35 horsepower at 14,000 rpm. Japan had no roadracing circuits at that time, so the four-cylinder GP machine was fitted with semi-knobbies and tested on a scrambles course.

The original four was never raced in Europe however, because in 1960 Honda built two new racers, a redesigned 125cc twin and a brand new, 250cc four. Like the original, the new four was an inline design mounted transversely in the frame, utilizing double overhead camshafts and four valves per cylinder. Honda engineers apparently felt that this was a good design and used the same basic layout in all later racing engines. They were right. 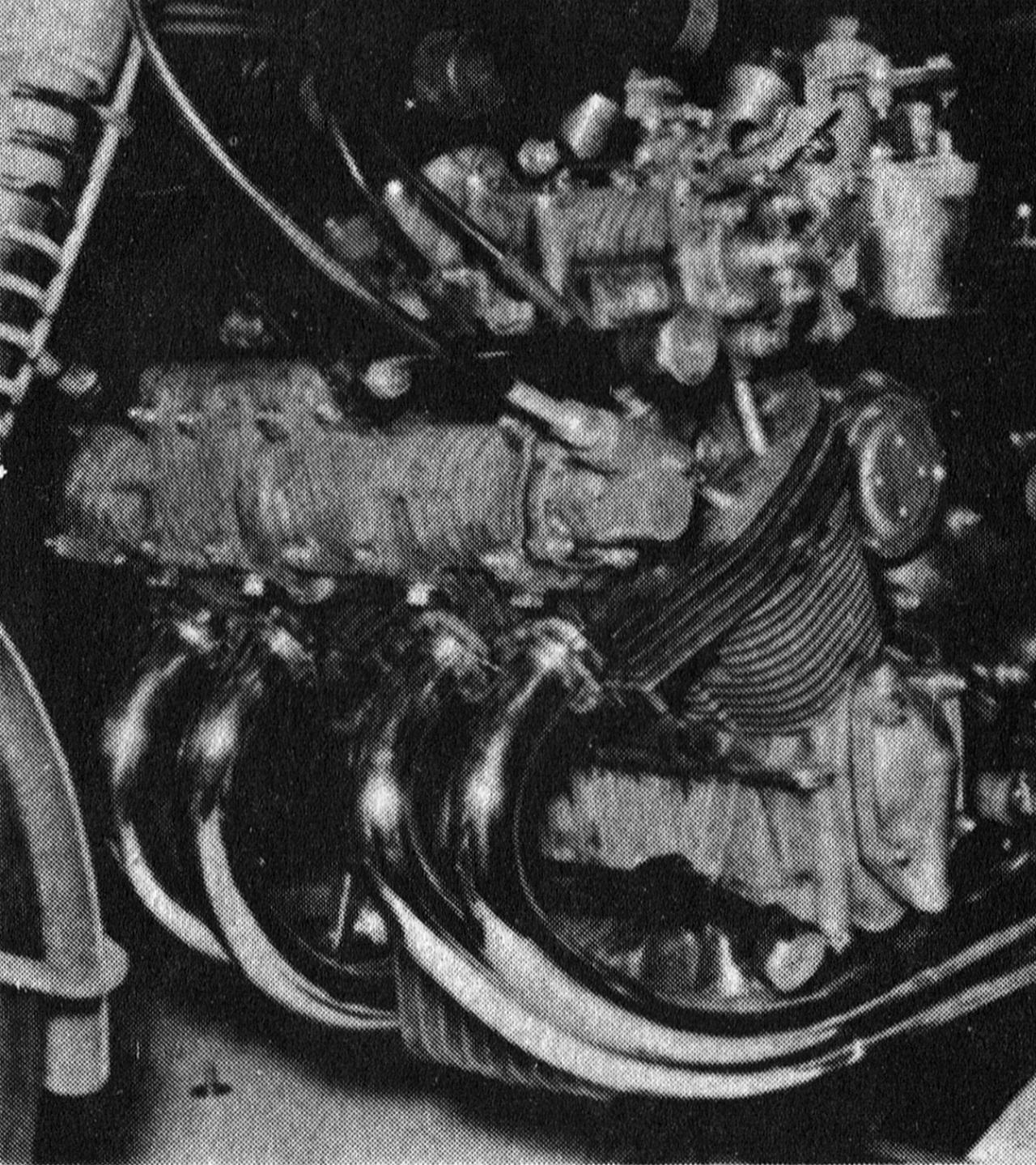 The new four had a completely redesigned carburetion system. The four slide-type carburetors were bolted solidly together and insulated from engine vibrations by rubber intake tubes. The throttle slides were positively opened and closed by a dual throttle-cable arrangement that actuated a common throttle linkage at the carburetors. One cable opened and the other cable closed the carburetors, eliminating the possibility of sticking throttle slides. If this sounds familiar to you, it should. Examine the throttle linkage on your CB 500, 750K1, or 750K2.

For the 1961 season, the four was modified with a dry sump lubrication system and new Keihin racing carburetors that incorporated integral float chambers and cylindrical throttle slides. Output was up to 42-43 horsepower, and in 1961, Honda won the 250cc World Championship title. 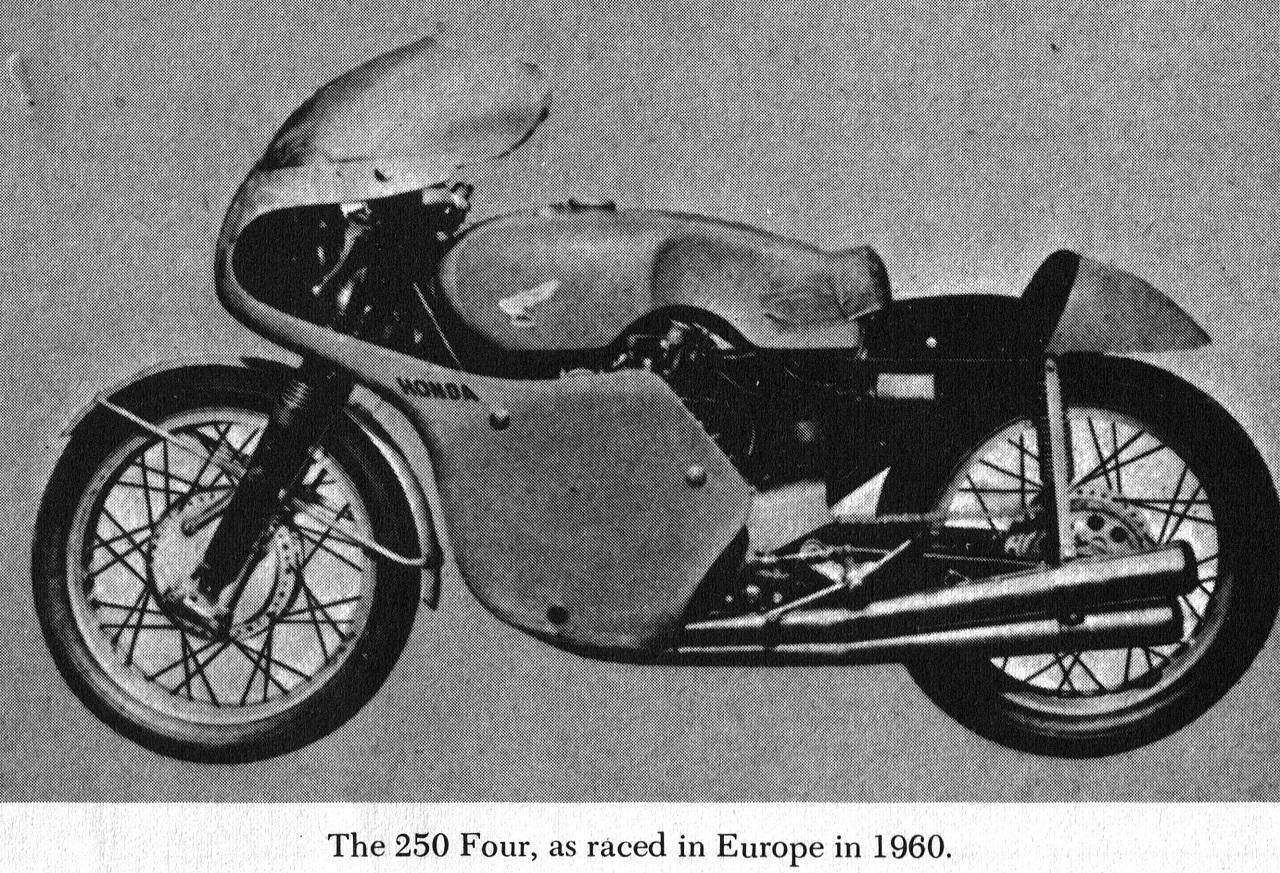 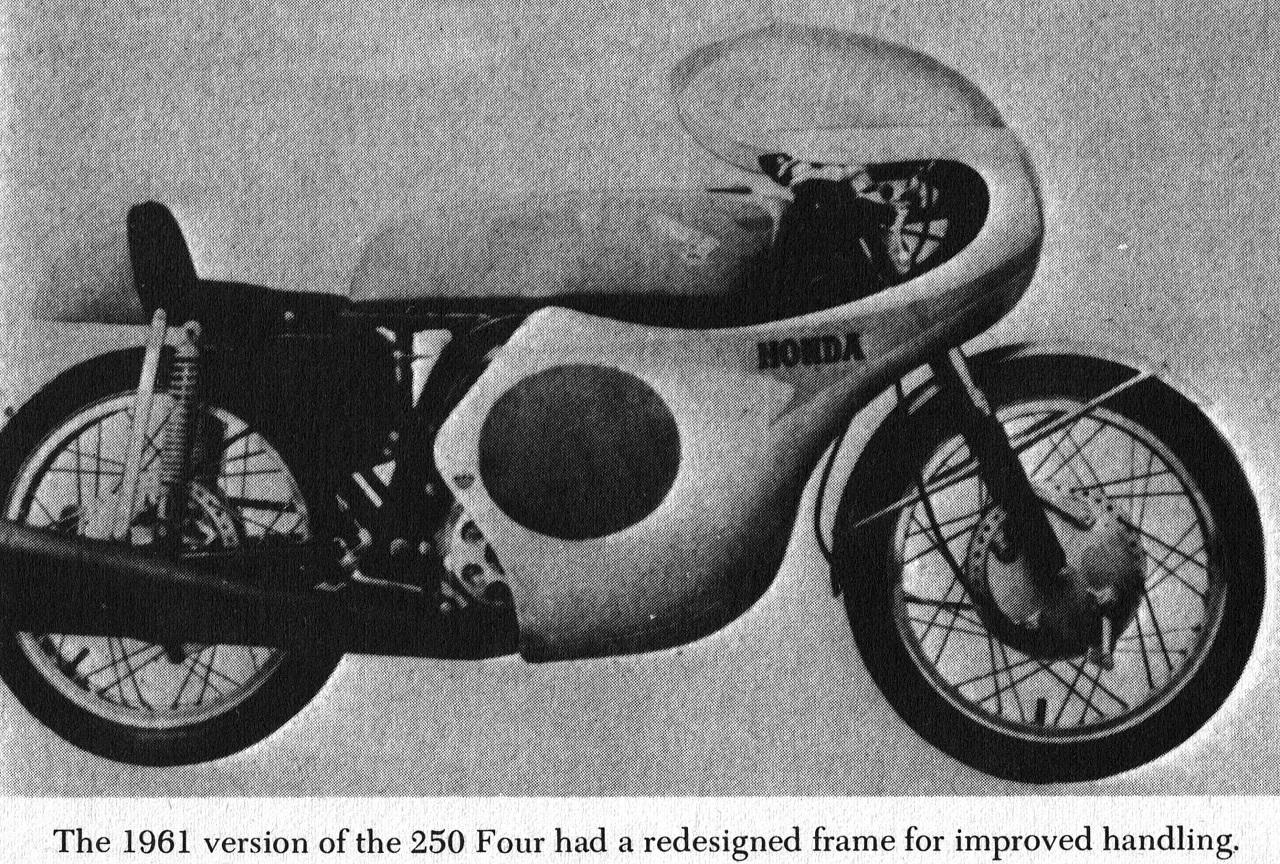 The next multi to come from Honda was a brand new, 125cc four, designated the RC146. Built along the same lines as the 250 four, the RC146 produced 25 horsepower at 16,000 rpm and featured an right-speed transmission and a transistorized ignition system. This tiny but mighty four was timed at 125 mph at the Isle of Man in 1964 and won the 125cc World  Championship that year. 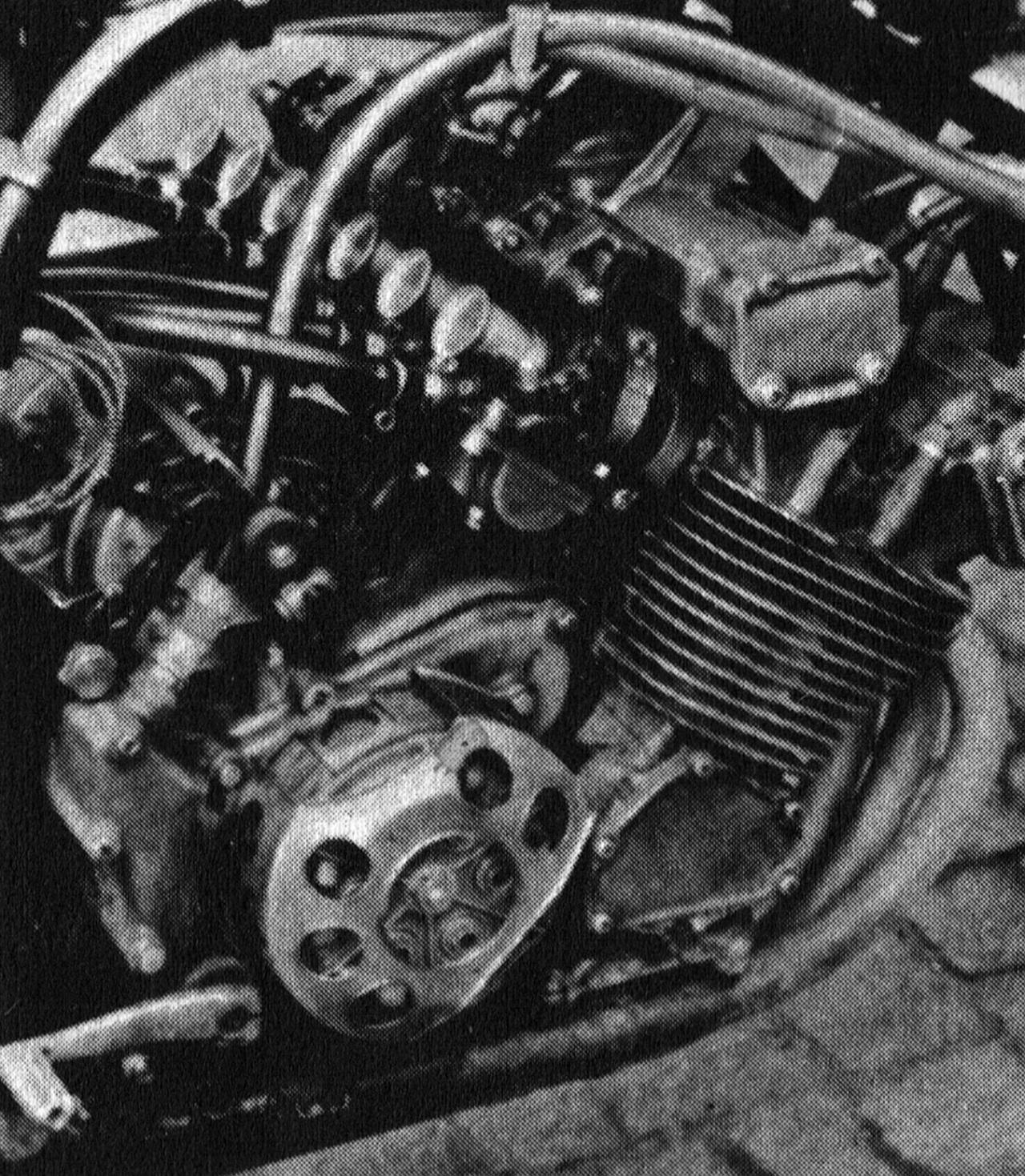 A new model, the RC165, was introduced at Monza late in the season as a last ditch attempt at the 1964 Championship. The RC165 had no less than six transversely mounted, inline cylinders and produced 54 horsepower at 17,000 breathtaking rpm. It was a masterpiece of engineering and technological sophistication, and remains as one of Honda's most brilliant achievements. The RC165 didn't win at Monza though and was to require one lull season of racing before it would be fully sorted out and reliable. Incidentally, there is an amusing sidelight to the introduction of the new six at the 1964 Italian GP. It seems that Phil Read, the Yamaha ace, decided to throw a scare into (he Honda mechanics, who were thoroughly enjoying the attention and excitement that their new baby was provoking. Read merely wired two extra expansion chambers onto his Yamaha twin, threw a cover over the engine, and pushed it slowly by the Honda pits. Eyes grew wide and hearts stopped beating as the rumored, but not yet expected Yamaha “four” glided silently past the more than somewhat dismayed Honda contingent.

Of course, Yamaha’s 250 twin was no match for the Honda six, even with two extra expansion chambers tacked onto it. By the end of 1965, the six had been developed to the point where it was nearly as reliable as it was fast and the handwriting was on the wall. So for 1966 Yamaha unveiled their ultimate weapon, a water-cooled, V-4, two-stroke, and Honda countered by retaining the services of one M. Hailwood to do battle on the swift six. The show then began in earnest, with neither side holding a clear advantage. The Yamaha had more power but the Honda handled better and that was it. The 1966 and 1967 250cc World Championships went to Honda, but both were contested right to the bitter end with the results hinging on the last race of the season. Hailwood and Read staged some of the closest and most hard-fought racing the world had ever seen, and by the time Honda pulled out of racing at the end of 1967 (presumably to concentrate on the development of the CB 750), the RC165 was delivering somewhere around 60 horsepower, which works out to 4 horsepower per cubic inch. The six must be regarded as one of the most fantastic motorcycles ever built.

Naturally, Honda did not concentrate solely on the 250 class during this period. Late in 1965 a brand new 125 was introduced. Each of its five cylinders displaced 25cc, and amazingly enough, the four-valve head layout was retained even though this meant that the intake and exhaust valves were limited in size to 13 and 12 mm, respectively. The 125 five was developed from the earlier 50cc twin and was therefore quite reliable right from the outset. It produced 30 horsepower at 18.000 rpm and could be twisted past 22.000 remarkable rpm with no ill effects, which was even more remarkable considering that ordinary coil springs were used to control the valves. 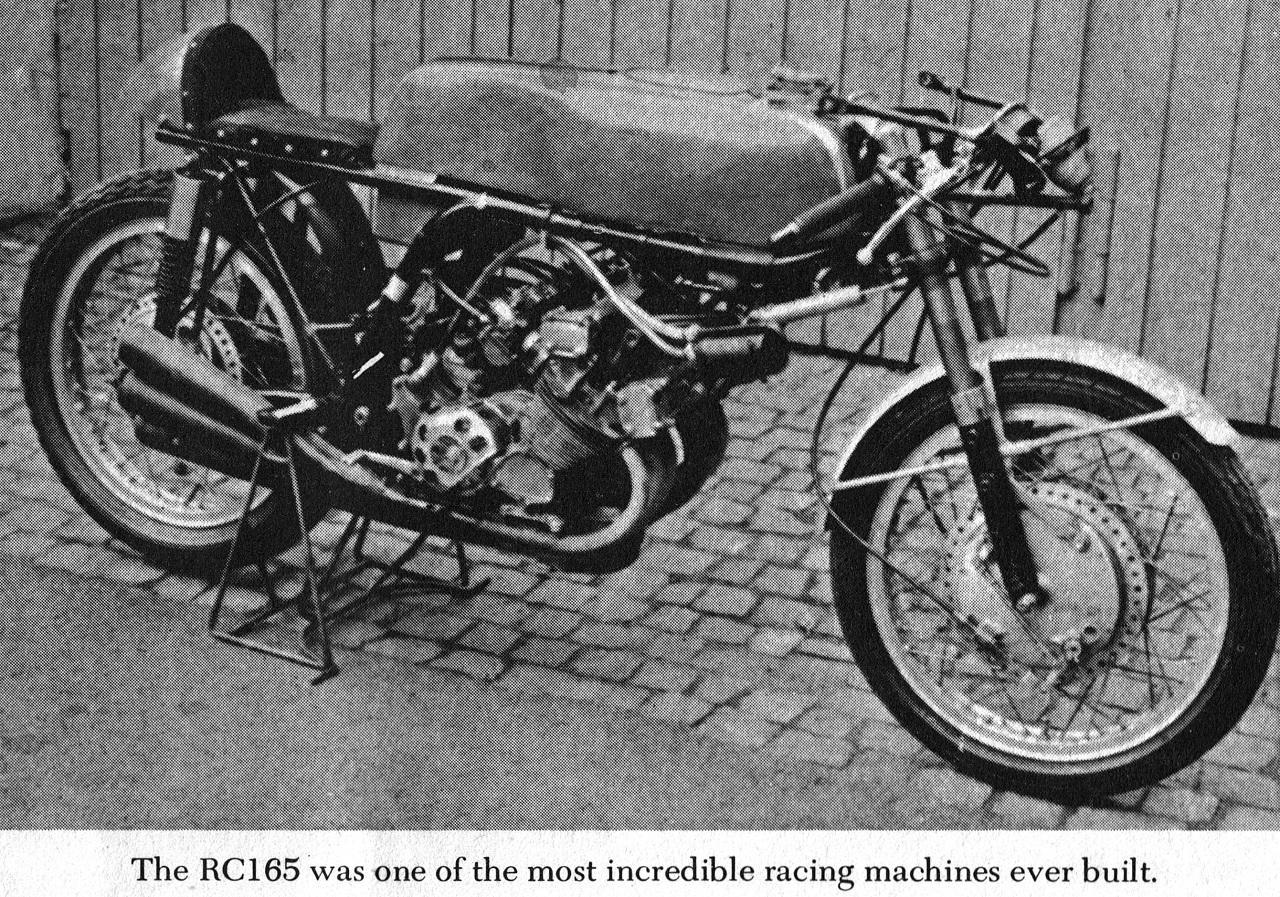 At the West German GP in 1967, a new 350 appeared. A punched-out version of the 250, the new six displaced 320cc and pumped out close to 70 horsepower at 16,500 rpm. As can be imagined, it was an extremely rapid machine. But for brute strength, the honors must go to the 500 four, which was a beast in every sense of the word. The big four incorporated most of the usual Honda design features, its major difference from the norm being the wet sump lubrication system with twin oil coolers. Even though handicapped by having a mere four cylinders, the 500 possessed so much power that it was almost uncontrollable. Too much power, in fact, for its frame and brakes, which simply couldn’t handle the more than 90 horsepower churned out by the monster engine. Mike Hailwood came closer to taming the thing than anyone; even so, it was reported in 1967 that “ . . spectators shudder and blanch as Hailwood goes rushing past on the 500, obviously struggling for mastery all the way.” It was all engine. 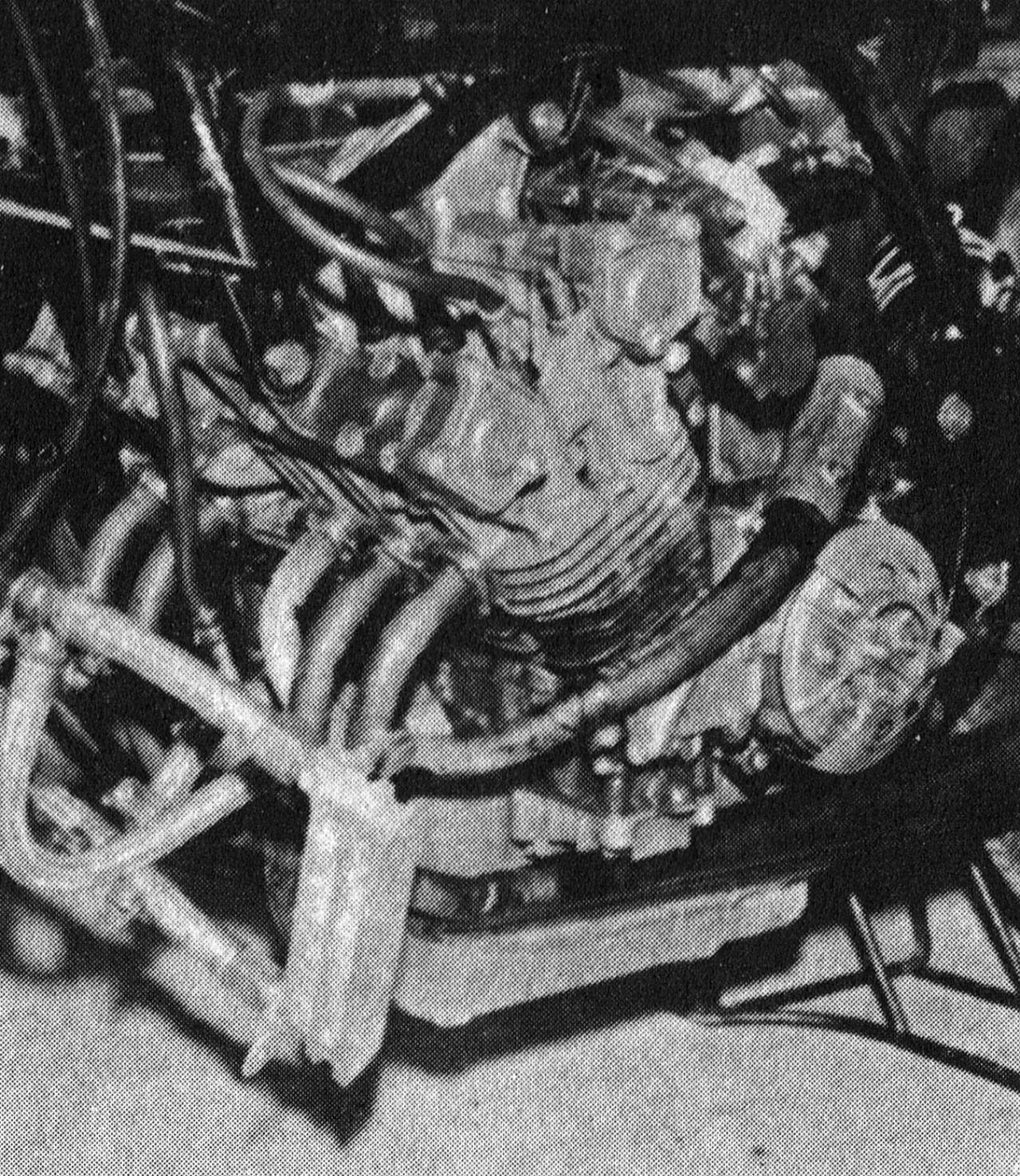 But then, the focal point of any Honda has always been its engine, and in this area Soichiro Honda has no equal. Judging from past performances, Honda is capable of producing some incredible machines and such a dynamic company is just not capable of standing still. Perhaps, tucked away somewhere within the depths of Honda Research and Development, there’s a . . . six-cylinder road bike? An eight-cylinder racing bike? A fantastically powerful Formula 1 Grand Prix car? Place your bets now, while there’s still time. As the ads say, “Sooner or later, you knew they’d do it.”