Progress on the CD125 indentification!

Hi all! Everyone's been so very helpful, thank you all very much! I've received many good leads and it's pretty fun to search for data! It's been suggested that the tank would not be the right one for this model. And this makes sense since one can mostly only find CD125 images with differently looking fuel tanks. So a CL160D tank was suggested by Patrick! And yes this looks very close to the one I have! I noticed a difference though!

This is my fuel tank's mounting points.

It's also funny to read that there is a lot of confusion around the early, dare i say first Honda CD125 like this. And every time it is the fuel tank that throws people off. Take this example!

ashimotok0: Anyone know if final library shot is a genuine tank and alternative colour scheme as I love it.

Also interesting is the following:

ashimotok0: This is slightly different though as it's a CD125 never sold in the UK.

So now what? Well, let's enter different parameters in Google and do another search. I should be working right now, but it's not letting me go, haha. Again I end up at CMSNL, but they do not have the right parts list for this particular model. I am sure there are plenty compatible parts, but I want facts. I want to see my fuel tank in a parts list!

There is a small INFO button on that website that I completely missed. And lo and behold, the tiny picture becomes a larger one. I've been looking for it already, but I was unable to find it. So here it is, flat seat, white tank, indentation in the exhaust pipe and the only difference here what I can see is the headlight/speedometer housing that seems to be different. 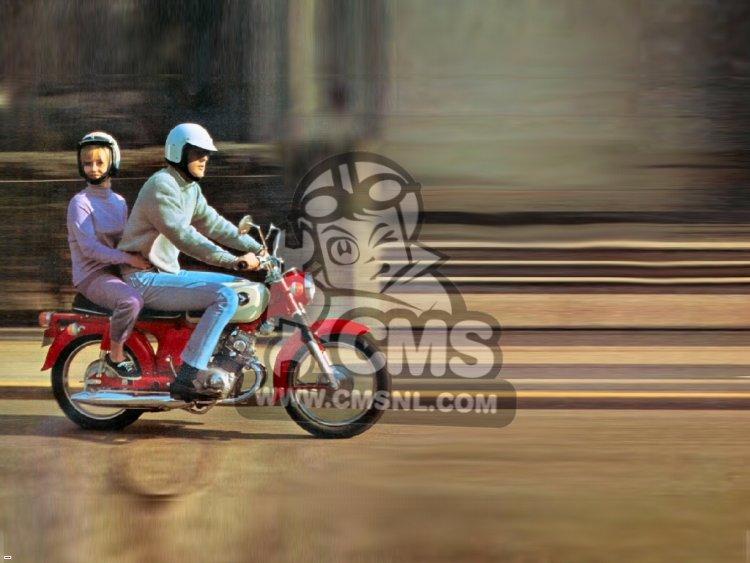 So let's see what else this page tells us;

First Honda 125 to use the new lightweight side cam-chain drive engine, the replacement for the C92 type unit. Launched in Japan in 1966 as a fairly soft commuter with 12.5PS @ 10,000 rpm, this was to be the for runner of the CB125SS, the SS125 and the 125 K series sports bikes. This was a handsome machine , and quite rare outside of Japan. In 1969 an ‘improved’ single seat model with heavy duty luggage rack was introduced, still with the ‘sloper’ engine and electric start, for Home market models.

In 1971 cam the third incarnation of the commuting 125 twin, this time with the upright engine, still with the same closely spaced cylinders and side driven cam chain.

The wheel diameter now being increased from 16” to 17”, made the bike a little larger, the CD125 finally bowing out with the 1973 model, with the only real change being the dropping of the oh so ‘Sixties’ tank side chrome panels. All of these work a day 125 twins are charming and coveted by collectors, that single carburettor and four speed box being one of the charms of this lower powered but oh so smooth twin cylinder unit.

Sooo, does this mean that I have a rare Honda model? That would be pretty neat! And as Crashooper noted, it's such a beauty! And completely untouched still even. Original paint and all. And the article indicates that mine is from before 1969 since my CD has a buddy seat and no electric start.

This is the registration data of my Honda, and it has
been registered in NL on March 11th, 1968.

Two more things to solve: Finding a parts list and willing to buy one, as long as my fuel tank is depicted in it. I don't care in what language, I want to see this particular tank. And finally, is it a Honda CD125 or a CD125A?

Again, many thanks for the help so far! It's very much appreciated!!