All parts on a Honda motorcycle have a unique part number. Honda divides parts into two broad categories, General Parts and Standard Parts. General parts are those unique to Honda, such as valves, pistons, gas tank etc. Standard parts are parts that follow universal standards, such as nuts, bolts and such. 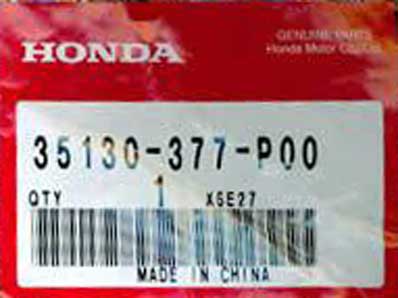 * The first string of digits (22201-XXX-XXX) indicates the Honda function and component number for this part. For example, there are several different part numbers for the TL clutch friction plate, all sharing component number 22201. Clutch steel plates have f/c code 22311, indicating same function but different component.

* All TL125 models (1973 K, 1974 K1, 1975 K2 and 1976 S) share the product code 355. All General parts having a different product code are "recycled" from other Honda models. Only parts with code 355 were originally designed for the TL125, but may have been used in later Honda models. The product code is probably the most interesting portion of the part number when trying to determine interchangeability of Honda parts between various models.

* The third string of digits (XXXXX-XXX-000) is the Classification Number. I believe it is mostly used to indicate various suppliers or improvements for the same part. Also, any potential color code is tacked at the end of the classification number as digits (letters) 4 & 5. Note that some pretty universal parts are still listed under General Parts number. For example most (all?) TL oil seals carry a general parts number. Luckily Honda parts fiche lists the actual dimensions for parts like this.

Standard Parts have a part number divided into 2 sections, such as 93500-06040 (6mm x 40mm pan screw, for example TL125 clutch side engine cover). The first string of digits indicates the function/type of the standard part, for example all pan screws are 93500-XXXXX. The second digit indicates dimensions for the part. Standard parts occasionally have a third string of digits indicating the ISO standard designation and chemical surface treatment.

Source: A TL125 website of which I lost the URL of. Sorry for that. Sauce: http://oldmanhonda.com/MC/MC.html