4-Stroke.net is a document repository dedicated to the preservation of Honda's legacy regarding its mopeds and motorcycles. The objective is to systematically collect every single shred of data from the internet, books, newspapers and other sources. All the collected and sanitized data will then be published and be publicly available.

Documentation
A large part of the annual budget is used to purchase books, newspaper (clippings) and to renew archive subscriptions. When a book has been properly digitized and harvested for data, it will be sold off to recreate a budget for more acquisitions.

Video and Photos
I try to store and preserve as much media as possible. The preservation is done by mirroring digital media on the internet and by purchasing VHS tapes and DVDs.

Websites
Personal and old websites are being mirrored every so often to preserve the data in case the site disappears. Only after a site disappears or is being abandoned, the data is merged into the library of 4-stroke.net

Funding
This website is not funded by advertising banners or tracking cookies. The budget required for this website is provided by the founder and donating visitors. Companies are allowed to submit an advertorial which will be published after checking its content and the full payment has cleared.

A bit of history
A long time ago, a small group was formed named HDH which stood for Honda Divisie Hilversum. It had a few members and had a small website. The internet was expanding, and it decided that the availability of information of 4-stroke Honda mopeds should become better. There was too much inadequate and scattered information scattered around, and this needed to be changed.
Due to a past of amateur radio, the name Race-Eend was adopted in the domain name, resulting in race-eend.com. This would become the home of many websites, among the early stage of 4-stroke.nl. That website came alive in 2003. It quickly became well known and was visited by people all over the world, mainly due to the significant amount of available documentation.

As for so many things, personal life became a higher priority than maintaining the website which then resulted in an outdated and partly broken website. This went on until 2010. It was painful to see that all the work was going to waste, and it was decided to revive the site by gradually updating the software. The domain name got changed to 4-stroke.net, and it underwent a few visual changes. The core of the website got upgraded and improved.

A rather unexpected outcome of a simple upgrade then crippled the entire website. On top of it all, it was discovered that the latest backup was broken as well. It was seen as a clear signal to start from scratch with new software, a new host and a significant number of safety measures. It then took a little over a year to manually transfer all the data from the broken website over to the new.

The result is something I am proud of. A clean looking website that has data added to it on an almost daily basis, free of annoying banners and free for everyone to enjoy and learn from. 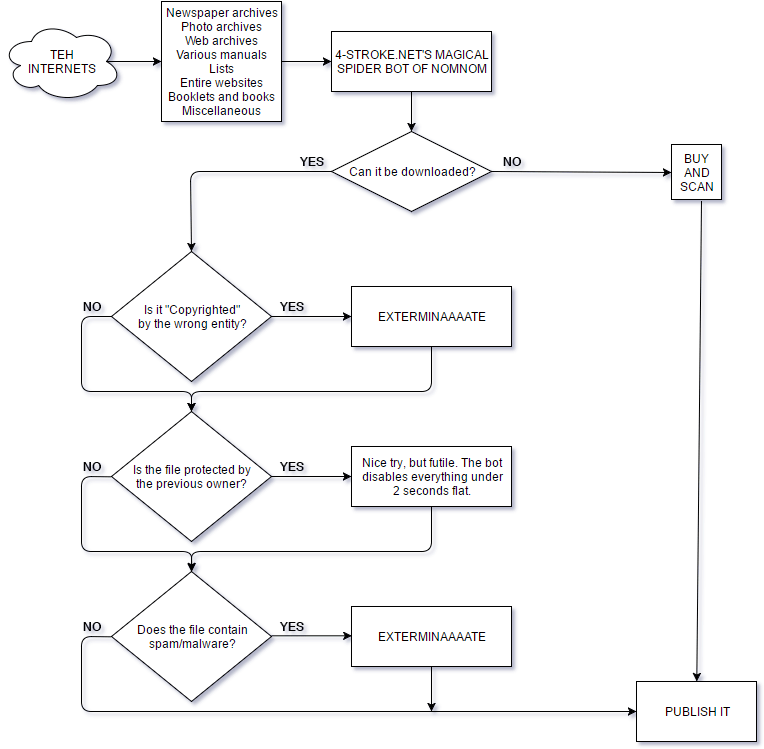